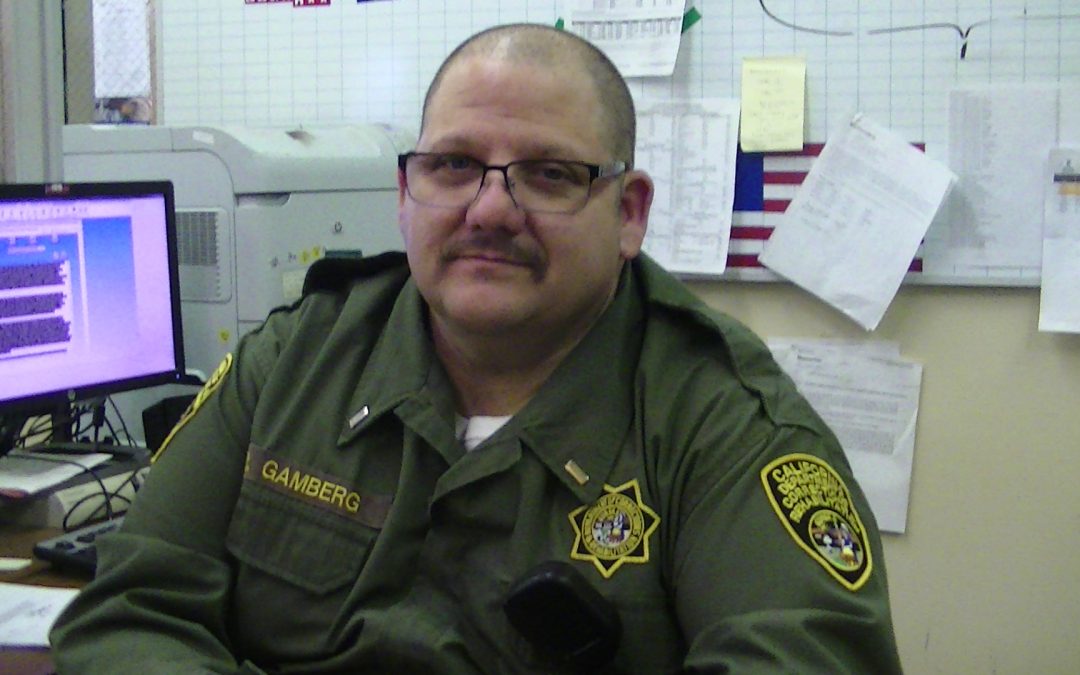 One of the greatest challenges for law enforcement is working with incarcerated criminals. While local and state police take the lead on investigations, once a criminal is serving time, correctional officers take over. It is their duty to ensure not only that criminals remain locked away but also to prevent criminal-on-criminal violence, protect their fellow officers, and even protect inmates from rogue officers.

Robert A. Gamberg Sr. is one such fine correctional officer. Rob began working in a small county jail in Quincy, CA, in 1988, and spent 21 years at High Desert State Prison (HDSP). He is now a Correctional Lieutenant at California Correctional Center (CCC) for the California Department of Corrections and Rehabilitation.  He runs a Level Three facility (the highest level is Four) where inmates have “out dates,” meaning they will be released in the near future. There are currently around 900 inmates in Rob’s facility and approximately 3,000 in the entire department. Managing this population requires more than a show of strength, which is why Rob became a Certified CVSA Examiner. Adding this certification to his core strengths as an investigator gave Rob the leverage he needs when interviewing inmates who are under suspicion of in-house crimes.

Dealing with Crimes in Prison

The California Department of Corrections and Rehabilitation currently has over thirty CVSA systems in their facilities, and Rob became a Certified CVSA Examiner in 2007 when he was requested to do so by his Warden. He found this technology fascinating, adding, “It’s so much different than polygraphs. I have taken polygraphs, but I was really interested in the computer version of the truth verification, and I thought it was really kind of cool.” Rob was working in investigations in the prison when he graduated from the CVSA course. He “utilized it for drug investigations and interviews to find out if your inmates are lying about bringing in narcotics, or stabbing somebody, or being involved in criminal activity.”

No one is shocked to hear that prisoners lie, and the CVSA has become a valuable tool for discovering the truth about threats or crimes committed in prison. As an example, Rob tells us, “We have inmates who drop handwritten notes (we call them kites) where they are saying we are going to assault staff, we are going to attack a staff member, or this is going to happen.”

They can’t go back to the old ways of locking down a whole facility of inmates for a long period of time because of reform measures, so the officers have learned to discern who wrote these notes through handwriting analysis. They then conduct interviews, where “the CVSA helps us move quickly through these investigations.” Rob adds that the CVSA works particularly well with lower level inmates because they have an out date and can be written up or receive a rules violation if they’re discovered to be lying.  The CVSA reads stress in the human voice, and those inmates experience that stress when they realize they may not get released on time.

Rob once received information that a convicted serial rapist in the Sensitive Needs Yard (SNY) was planning on raping a female cook. After placing him in administrative segregation, Rob interviewed him and conducted a CVSA examination. Even an experienced officer like Rob can be led to believe someone is telling the truth, and he says, “Talking to this inmate, he was very believable. He made you feel comfortable with what he was saying. There is no way this guy is even involved in this.”

Rob was blown away when he saw the CVSA charts in response to questions about whether the inmate was planning to rape the cook. As he puts it “this guy hard blocked,” which is the strongest indication of a lie on the charts. Not only did this exam save a potential rape victim, but Rob was able to document the deception in his file so this inmate could be kept away from female staff.

The CVSA also clears those who aren’t being deceptive. There are people in prison who were wrongly convicted, and some are set up by other prisoners to take the blame for a crime. Rob says of the CVSA, “I always tell people this will either bury you or set you free.” He trusts the technology’s accuracy, and admits, “I consider myself to be—for lack of a better word—a great bullshit artist, but I cannot beat that machine.” And since inmates are often wary of officers and sometimes skilled liars, having such an effective means of truth verification is critical.

As in police recruitment, it is crucial that the wrong officers aren’t allowed into the prison system. Rob’s department is now using the CVSA in pre-employment background screenings to help prevent certain criminal elements from infiltrating the system. He explains, “You have the major prison gangs within the system—you’ve got the Aryan brotherhood, the Nuestra Familia, the Mexican mafia, and…the Black Guerrilla Family. These people send their people there.  You’ve got gang members’ kids that grew up trying to get into law enforcement to try and help out their perspective gang and bring drugs in and bring phones in….The [CVSA] is a pretty amazing tool to try to keep that kind of riffraff out.” The CVSA as a pre-employment tool helps hiring departments weed out people with gang affiliations, as well as people who have lied about other criminal or behavioral issues—such as having a substance abuse problem or a propensity to violence—which would make them unsuitable for the job.

We asked Rob what makes a good correctional officer. He says, “They come from every walk of life. I was prior law enforcement. We have a lot of prior military people that come into the department. My wife, she was a stay-at-home mom. She worked for an insurance company as a secretary.” Today, Rob’s wife has been working as a correctional officer for twenty years. He adds, “It takes a special kind of person to go inside the wall.” Hiring that special person is much easier when they are screened and given the proper tools to do their job. When the Warden encouraged Rob to take the CVSA course, he not only gave him an advantage that benefited the entire prison population but also helped Rob develop new investigative skills.

Rob is set to retire in about nineteen months, but he loves his role as a CVSA Examiner so much that he is going to continue on the path of truth verification, offering his services in the area of pre-employment or as a consultant or subcontractor for law enforcement. In the meantime, Rob will continue searching for the truth in the dark, deceptive world of prison and working with the CVSA to stop and prevent further crimes.