The Outcome of High Stake and Low Stake Lies: CVSA Testing in the Lab vs the Field 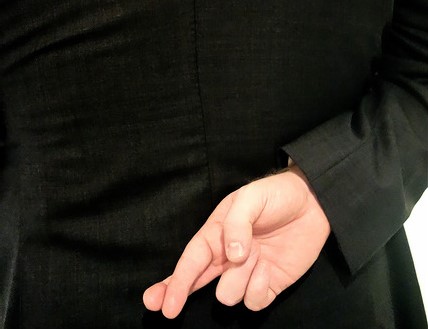 Remember when you were a child and you told what your mother called “a fib?” Technically, that’s an unimportant lie, but as a kid, the consequences of getting caught felt huge. Over time, we become comfortable with those relatively inconsequential lies and casually tell “white lies” to protect someone’s feelings—“No, those jeans don’t make you look big.” There isn’t any real stress caused by this dishonesty because, even if you get caught, there are no major consequences.

But there’s a big difference between lying about how your wife looks while wearing a pair of jeans and lying to your wife about being with your buddies Wednesday night when you were really having an affair. Now that is high stakes. If you get caught, you might end up alone on the street the next day.

As a private investigator, I uncovered important lies such as a cheating spouse, fraud, or theft. Still, that is nothing compared to a police officer sitting in front of a suspected rapist or murderer and getting him to spill those truly big stake lies. These are the moments when suspects really fight to hide the truth and truth verification systems like the CVSA play a vital role in uncovering their darkest secrets. And therein lies the problem with testing truth verification technology in the lab instead of the field; a controlled environment just can’t capture the all-or-nothing feel of a real case. This is why it is important for research on truth verification to focus on the technology’s performance in the field—not just in a controlled lab setting—to measure its effectiveness in detecting truly high-stake lies.

There have been dozens of studies on detecting deception, but unless the stakes are high, the results of those studies aren’t always helpful for those working in law enforcement. After all, validating truthfulness in a lab is a bit like asking people in a focus group to bare their souls for a small monetary reward. You’re never going to get completely valid results because, for most of the participants, there just isn’t enough risk to care whether they are being completely truthful.

A quick search on ResearchGate pulls up dozens of studies claiming the validity of the polygraph in lab studies. This technology has been used for decades, but because the CVSA is a newer system, there simply haven’t been as many lab studies conducted. However, the empirical and scientific validity of CVSA has been proven in the work of actual law enforcement officers and a ground-breaking study conducted by Professor James L. Chapman and neuroscientist Marigo Stathis. The paper, “Field Evaluation of Effectiveness of VSA (Voice Stress Analysis) Technology In A U.S. Criminal Justice Setting,” focused on over 15,000 CVSA examinations conducted in the field. Conversely, studies conducted on deception detection in the lab—like those of the polygraph— are flawed because there are no real jeopardy or consequences involved in such studies. Hence, the lies are low-stake.

The flaws inherent in lab studies could explain the discrepancies between studies regarding the polygraph versus the CVSA. Marigo, who is continuing her research into the use of CVSA in the field, commented, “I do feel that there were some studies that were executed years ago, federally funded studies that said that the CVSA does not work. Those were lab-based studies.”

She points to Maureen O’Sullivan’s 2009 study titled “Police Lie Detection Accuracy: The Effect of Lie Scenarios” and says, “It is not the lab based environment but really the field environment where you have real life jeopardy or consequences involved that affect the technology. People know that they are lying, but if there is no real-life punishment, perhaps they will not feel the same amount of stress.”

And, since truth verification systems measure the stress individuals feel in response to lying, ensuring an accurate representation of test subject’s stress levels is crucial in measuring the accuracy of the technology. O’Sullivan’s paper reported on 23 studies focusing on lie detection which involved over 31 police groups over eight countries. The researchers discovered that “police officers tested with lie detection scenarios using high stakes lies (i.e., the lie was personally involving and/or resulted in substantial rewards or punishments for the liar) were significantly more accurate than law enforcement officials tested with low stakes lies.” In other words, police officers were more capable of discerning deception in real-life interviews than in a lab setting where the test subjects were using scenarios that had no major impact on their situation.

One might think it would be easier to spot a high stake lie through body language cues or verbal signs, but that isn’t always the case. In fact, the opposite is often true because someone with more to gain or more to lose will be even more motivated to hide their deception. In Marigo’s own research, she found it took longer to get a confession when there are high stakes lies involved because again, the consequences are greater. She adds, “There was an indirect relationship with confession rates with crime consequences. In other words, if people were being questioned about a crime for which they could get a lot of sentencing time—say 20 years to life versus something like fraud, which might be like three years or less—for those higher crime consequence categories or crime types, there was a smaller confession rate versus people who committed minor offenses.”

The problem with lab studies is that it is difficult to replicate such high-stakes lies. A voluntary test subject just won’t feel the same stress as someone being questioned about murder in a police interrogation room. And, as O’Sullivan’s report put it, the scenario “must actually involve high stakes and not merely appear to do so.” Focusing research on CVSA results in real situations where the lies can be later validated by other evidence or a confession is a more valid approach that avoids the vulnerabilities of a lab-based study where test subjects have nothing substantial to lose or gain.

Both the polygraph and the CVSA are tools invented to help law enforcement and other agencies validate truthfulness in the real world—which is why they should be tested in those scenarios. In the interrogation room, the person being examined for truthfulness knows they have everything to lose—and those high stakes just can’t be replicated in a lab.