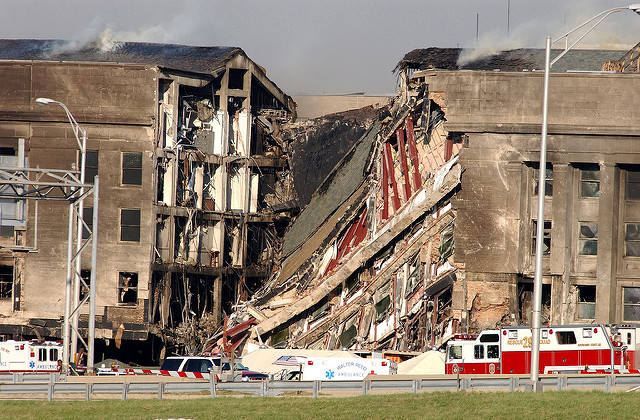 The damage to the Pentagon in the terrorist attack in 9/11. Image source: Flickr user slagheap.

It was the day our innocence was smashed into pieces smaller than DNA molecules. I was at home on 9/11 when my brother, a firefighter, called and told me to turn on CNN. I remember the exact moment because time stood still. All those people were in the towers—innocent people at work or doing business—and now their very essence was fused together in what became a day we didn’t want to remember but couldn’t forget. We had to somehow gather our resolve together to ensure this didn’t happen again. But such attacks continue, and now we wonder—is it safe to dance in a nightclub or pray at a place of worship or attend school?

The reality is there are terrorists among us, and many more are likely planning entry points into the U.S. And while federal initiatives such as tighter regulations and better screening of visitors or immigrants to the U.S. is crucial for preventing such attacks, these methods can be discriminatory unless they are conducted on everyone rather than just one sector. They also don’t address the huge problem of homegrown terrorism, and background screenings only provide limited—and sometimes unverifiable —information. This means interviewing and interrogating possible suspects, witnesses, or those who stumble on information is the best preventive measure.  A truth verification tool such as the Computer Voice Stress Analyzer (CVSA®) can aid investigators in those critical interviews where officers may be challenged to engage with individuals who don’t speak English or are used to different cultural customs.

Cross-cultural communications and language barriers are some of the most difficult challenges to overcome when conducting interviews with a suspect, witness, or person of interest. One study of interest examined “cross-cultural judgements of deception and the interpersonal factors that moderate the accuracy of these judgements” and found that “verbal and non-verbal cues to deception vary across cultures.”  For instance, depending on the culture, eye contact may be viewed as disrespectful, gender relations may be handled differently, or body language and gestures may have other meanings. All these cultural discrepancies make it harder to determine indicators of defensiveness, guilt, or other relevant attitudes.

It is also a mistake to necessarily equate Islam with Isis or assume all people who practice Islam have the same culture. A person from Turkey has a different cultural outlook than, say, someone from Africa or the Middle East. We need to recognize those cultural differences during an interview where cues we would normally pick up—such as body language—may be different due to their culture. We also have to acknowledge that an investigator interviewing a non-native speaker may have some biases—conscious or not—that could color the results.

Language differences provide a further layer of difficulty. Although most law enforcement agencies have translators on staff or on call, they may not be available at the crucial time when a suspect or witness needs to be questioned. There can also still be discrepancies in the meaning of words or phrases in other languages that don’t translate properly. According to one study, “cues to deceit occurred more frequently when interviewees spoke without an interpreter. ” Having to communicate through a third person could be detrimental, therefore, if it limits the likelihood of discovering lying. This study also showed that interview subjects provided less detailed answers when an interpreter was used and that the flow of the conversation was interrupted in ways that might cause frustration or other negative feelings. Fortunately, all these challenges can be overcome with the right training, education, and tools.

Reinforcing the Terrorist Detainee Interview or Interrogation with CVSA

A truth verification examination can be extremely valuable in these difficult interviews, but the polygraph is limited in scope when used on a non-native speaker. One study showed that skin conductance—a factor which the polygraph takes into account when determining deceit—is inﬂuenced by which language is spoken and by language proﬁciency.

In contrast, the CVSA is a portable, non-invasive truth verification tool that measures discrete changes in the human voice. This machine has no bias and can be conducted on a person from any culture and speaking any language. Neuroscientist Marigo Stathis is conducting ongoing studies on CVSA technology and has gathered data from those who used the technology with a translator and even with a deaf individual. She explains that the algorithm of the CVSA “is based on the FM inflections of wavelengths of the voice and what is not perceptible to the human ear but is perceptible to the technology and the machine.” Essentially, the CVSA is unaffected by cultural or language differences because the signs of stress it measures are part of the universal human condition rather than being related to culture or specific words.

Continuing to fund research such as Marigo’s or that of other scientists focusing on detection deception on a global scale is crucial as we focus more resources on the fight against terrorism. The High-Value Detainee Interrogation Group (HIG) provides links to many studies on their website, and the results of their research prove that we need to conduct further analysis, provide more education, and use all resources—including truth verification technology— to investigate terrorism.

Advanced training in interrogation techniques focusing on cultural and language differences combined with applied scientific resources such as the CVSA are critical as we move forward in the fight against terrorism. The men and women in local law enforcement especially—who are the first to respond to terrorist attacks and have the bravery to run into a building like the World Trade Center—deserve every tool possible to prevent another attack and keep our people safe.