The Reid Technique vs. the CVSA Interviewing Process: Are Adversarial or Empathic Interviews More Effective? 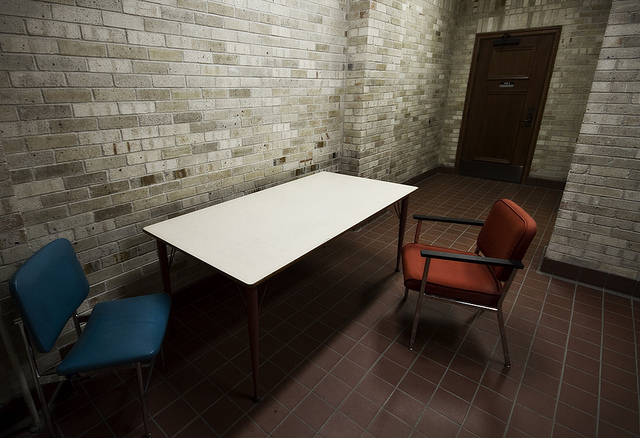 Encouraging a suspect or witness to communicate is one of law enforcement’s greatest challenges. When you have a defensive, hostile, or frightened individual in front of you, it becomes difficult to initiate a dialogue. Most investigators attempt to build rapport at the outset, but once it becomes clear the suspect or witness is not cooperating, the relationship often becomes more adversarial.

In past decades, police used tactics such as “the third degree” or “good cop/bad cop,” but we’ve come a long way in recognizing that a solid confession has to be obtained through methods that avoid coercion. Present methods of truth verification rely more on technology, physiological and psychological analysis, and best practices in questioning techniques.

The Reid Technique was often referred to as “the gold standard” of interrogation and interviewing methods. John E. Reid was instrumental in structuring the questions used in polygraph examinations, which, in the past, was the truth verification system of choice. Today, the Computer Voice Stress Analyzer® (CVSA®) is used by over 2,000 law enforcement agencies in North America, and this highly effective system has proven the adversarial approach to interviews and interrogations isn’t always the right one.

The History of the Reid Technique

Reid was a former Chicago police officer who started his own polygraph consultation business in 1947. At the time, the interrogation process used during a polygraph had not been standardized. Reid was interested in more than what the machine’s needles were doing, so he created an interrogation method using psychological manipulation in a structured process.

John Reid & Associates implemented their training program in 1974. “The Reid Nine Steps of Interrogation” focuses on the behavior of an individual, the types of questions investigators should ask, and encompasses everything from how to set up the interrogation room to when to move closer to a suspect during the interrogation process.

The Flaws in the System

While the Reid Technique was a step in the right direction, it is flawed. Investigators using the Reid Technique first use less confrontational interview techniques, but, if there is evidence of guilt, the approach becomes more accusatory. The more aggressive nature may be why this system has been found to elicit false confessions, especially in juveniles.

One of the first instances of a false confession that led to conviction occurred in 1955 when John Reid interrogated Darrel Parker and gave him a polygraph exam. Parker confessed to killing his wife, but, years later, Parker’s lawyers obtained the right to a new trial since his confession was obtained through coercion. Parker chose to be paroled rather than go through another trial. In 1988, Wesley Peery confessed on his prison deathbed to the murder, proving that Parker’s confession was forced.

In 1992, Juan A. Rivera, Jr. was wrongfully convicted three times—despite DNA and other evidence—for the rape and murder of 11-year-old Holly Staker. Rivera confessed after several days of interrogation using the Reid Technique. He was also given two polygraphs, which provided inconclusive results. It should be noted that Rivera had an IQ of 79.

Rivera was exonerated after almost 20 years in prison. Reid’s position was his technique was used incorrectly. Rivera was awarded the largest settlement for wrongful conviction in the U.S. at that time—twenty million dollars.

There are many stories in which the Reid Technique has resulted in confessions. Thankfully, however, the law enforcement community is always searching for ways to improve the accuracy of interview and interrogation outcomes and reduce the chances of false confessions. This is why many police agencies are transitioning to systems such as the CVSA which allow investigators to question suspects in a less aggressive manner.

A Lighter Approach and a More Truthful Outcome

Both the Reid Technique and the polygraph are designed in such a way that a suspect or a witness feels uncomfortable the moment they step into the interrogation or polygraph room. The clinical setting creates a tense environment in which an innocent suspect or witness might feel defensive from the start.

In contrast, the CVSA® interviewing process known as Defense Barrier Removal (DBR®) provides law enforcement with a means to verify truthfulness through a more empathic approach. CVSA examinations can be conducted in any room and the individual being examined is provided with some comforts, whether that means a more comfortable chair, a room with a window, or relaxing images on the wall. This is especially important when interviewing witnesses or victims of sexual assault or other highly traumatic cases.

Another concern regarding both the Reid Technique and the polygraph is the lengthy, stressful interrogation methods they both employ. However, CVSA examinations only take about 45 minutes on average, and the conversational tone allows suspects or witnesses to come into the process more relaxed and willing to participate.

There are many examples of the effectiveness of the CVSA approach. In one case, the Orange County Sheriff’s Office and the Orlando Police Department were on the hunt for a serial killer in Orlando. Suspect Larry Powell agreed to a CVSA exam, which indicated Powell was telling the truth. Detectives ruled him out and continued their investigation. Eventually they caught the real killer, Fredrick Cox, who was later convicted of three murders. In this case, the time saved by ruling out an innocent man may have meant the difference between life and death for more victims.

As with law enforcement officers trained in the Reid Technique or polygraph, CVSA Examiners also have training in interviewing techniques, psychology, and technical analysis, but they’ve found ways to engage with individuals that are more relevant to today’s culture. Defense lawyers are cognizant of case law where lengthy interrogations or certain questioning practices cause a suspect to confess to a crime they didn’t commit. Law enforcement is also under more scrutiny, with cameras in interrogation rooms and justice organizations focusing on wrongful convictions. Everyone in law enforcement is committed to developing positive techniques that produce results, and the CVSA team of experts embodies those principles. When truth verification is the goal, it serves the best interests of all parties in the criminal justice system to ensure investigative results are accurate and obtained without psychological or other forms of coercion.