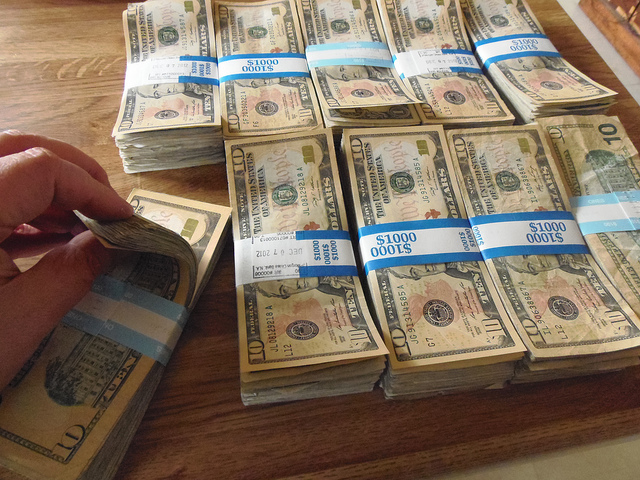 In a Ponzi scheme, interviewing people is how you follow the money trail. Image source: Flicker user Keith Cooper.

When schemers meet dreamers, visions of driving out of a four-car garage in a new Lamborghini can mess with cognitive thinking. Piles of “Benjamin Franklins” staring you in the face has that effect, and when the money starts to dwindle, those dreams turn into nightmares.

That’s the power of the Ponzi scheme, one of the oldest con games in the world and a common source of revenue for greedy types. There’s the Ponzi scheme masquerading as a multi-level marketing venture or the financial investment that sounds too good to be true. Offering high returns on investments is the hallmark of the Ponzi scheme and what lures people in. It isn’t until everything starts to fall apart that law enforcement becomes involved, and, by this time, the principals have likely squirreled away their profits in offshore accounts, put their investments in relative’s names, or disappeared from the country with everyone’s money.

When it comes to investigating these crimes, the best approach is a collaborative effort between forensic accountants, law enforcement, and the U.S. Securities and Exchange Commission (SEC). Initial police interviews with victims and witnesses are crucial aspects of building a case against the people involved in the scam. Ultimately, the goal is to get the truth from people working hard to cover up their scheming—and that’s why truth verification could potentially be a powerful tool in solving such cases.

The Process of Investigating a Ponzi Scheme

When a Ponzi scheme falls apart, forensic investigators search through the books, Certified Fraud Examiners from various public and private sectors become involved, and law enforcement conducts interviews, carries out warrant searches, and makes arrests. The U.S. Securities and Exchange Commission (SEC) will also investigate and enforce any actions against the company and principals.

However, as counterintuitive as it may seem, focusing on the financial aspect is one way to miss an important piece of the Ponzi scheme puzzle because at the heart of such crimes are people—people who have convinced others to dream big while lining their own pockets. You need to get information about what happened directly from the source.

And this is where law enforcement comes in. Although accountants can dig into the books, they don’t typically have the skills to interview witnesses, victims, and suspects like veteran police officers do. This part of the investigation requires the keen insight of an investigator who understands how to elicit information or a confession from a reluctant interview subject and to verify that information is accurate.

The collapse of a Ponzi scheme often starts with one person. In the Bernie Madoff case, that person was whistleblower Harry M. Markopolos, a Certified Fraud Examiner (CFE) and forensic accountant. He found evidence of Madoff’s huge investment scheme after years of investigation. Madoff had used new clients’ funds to pay off older investors, and he offered a lower return investment that seemed safe until clients wanted their money and it was gone—but Madoff was rich.

Although Markopolos gave evidence to the SEC, they pretty much ignored his claims. And when Madoff was finally questioned by SEC investigators, he lied about everything. We won’t get into the convoluted puzzle that was the Madoff mess at the SEC, but people didn’t do their due diligence and the truth got buried.

In a report titled Investigation of Failure of the SEC To Uncover Bernard Madoff’s Ponzi Scheme, it is noted that one of the main failings of the SEC investigation was that they didn’t verify information like Madoff’s alleged trading with independent third parties. They quote a senior-level SEC examiner who said, “Clearly if someone…has a Ponzi and they’re stealing money, they’re not going to hesitate to lie or create records.” Consequently, the “only way to verify” whether the alleged Ponzi operator is actually trading would be to obtain “some independent third-party verification.”

Therein lies the crux of these investigations; the people getting rich, like Madoff, are undoubtedly going to lie. Those who report to the top may also lie because they failed to stop the fraud, and even the poor souls who got ripped off may provide misinformation out of embarrassment or fear. The only way to get to the truth in a Ponzi scheme is for investigators with strong interview skills to use rapport building interviewing techniques to get the people involved to open up.

But even the best interviewer can’t stop the pervasive deception in these cases. For that, you would need a truth verification system like the Computer Voice Stress Analyzer (CVSA®). While Madoff wasn’t given a truth verification examination of any kind and this potential use of CVSA has not been widely explored, it could have given SEC investigators the tool they needed to quickly validate Madoff’s claims.

Providing all parties with the option of verifying their statements in the convoluted world of the Ponzi scheme is crucial. It can help clear those who weren’t actually involved, and because it can be used covertly and over the telephone, the CVSA could quickly determine who is lying, whether in the boardroom or the bar. White-collar criminals are as deceptive as the rougher guys, and perhaps even more so given that they are wealthy and hide behind a wall of lawyers. But the CVSA doesn’t care if you have friends in high places—it just lays out your deception in a clear chart.

A Ponzi scheme always crumbles eventually, and it is up to law enforcement, the SEC, and other agencies to not only achieve resolution for the people who are scammed but to do it as quickly as possible before there is no chance of restitution. Getting to the truth accurately and quickly is key—that’s why conducting interview with the people involved is just as or more important than following the money trail.