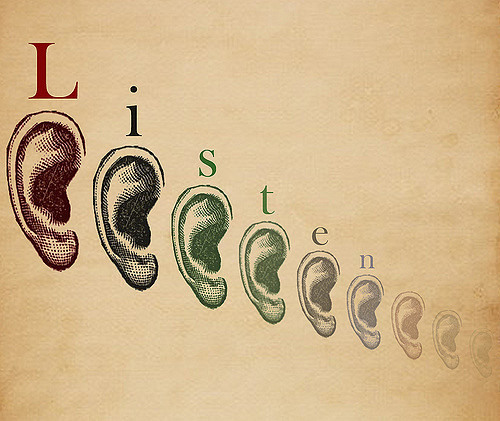 Have you ever had someone—a boss or your spouse, perhaps—just pepper you with questions without giving you a chance to respond? You automatically go into defense mode. Asking questions may be an important part of communication, but active listening is the real art.

While corporate America is sending their people to active listening seminars, sometimes law enforcement focuses so much on figuring out what questions to ask that they forget the most crucial component of the suspect or witness interview—leaving space for the answers. When there is pressure to get to the bottom of a case quickly, it’s easy to push too hard, but lengthy and aggressive interview techniques can lead to false confessions. Finding the right balance means thinking strategically about the interview process, being patient, and making your subject feel they are being heard.

Many veteran investigators know that listening is a skill, and while it may seem odd, some have gleaned techniques from an unlikely source—a TV detective from the 1970’s.

The titular character of the show Columbo was a homicide detective with the Los Angeles Police Department. The rumpled looking Columbo used an interview style that is now referred to as the Columbo Technique or Method. He would ask a casual, open-ended question and then patiently wait for their answer. Columbo made the person feel comfortable by making chit-chat about how his wife couldn’t make a decent cup of coffee. He had an unassuming demeanor and appearance, and once the person started talking, he started moving them towards telling him what he needed to hear. As he was wrapping up, he would drop in his, “Just one more thing” question, often strategically bringing up a piece of evidence. Being asked a lot of questions is stressful, so people let their guard down when they think the formal interview is over. This last question—the closer—would elicit important information or a confession because Columbo indicated he was listening by saying things like, “I understand…” One thing he never did was use coercion or aggressive tactics. Instead, he built rapport.

Of course, Columbo was the product of the writers’ imaginations, but even law enforcement experts like former FBI instructor John E. Hess have written about the value of Columbo’s technique, as he did in his book Interviewing and Interrogation for Law Enforcement. While this fictional character may have seemed scattered or unfocused, he was completely in control of the interview and was being both strategic and empathic—something any investigator can take inspiration from.

The study found that the best results were achieved when investigators used open-ended questions followed by multiple and probing questions to encourage a “free narrative.” After that, one could move into the direct “yes or no” questions.

But although results showed that the best practice of interviewing involved allowing the suspect to talk more, the researchers found that most investigators were not following this “80 percent listening, 20 percent talking” rule.  Instead, the study showed that most police investigators used closed “yes or no” questions—with 30 percent of the questions in this format—and less than one percent of the questions were open-ended. The researchers reached the opinion that law enforcement officers in the study and in general were not engaging in interview techniques that allowed for a sufficient response from the suspects.

If you don’t let a subject talk freely, even if it appears they are rambling on, you may miss an area of investigation or a line of questioning you can bring up based on their statements. The researchers pointed out that most of these issues were due to a lack of training. This is where the art and science of interviewing come in—being able to engage with a suspect is easy for some people, but you still need to learn proper interview structure and how to listen effectively.

You can start the interview with an open-ended Columbo style question — “You know my wife drives me crazy sometimes; I guess yours did, too?” Maybe you even elicit a laugh when you talk about how your wife lets the dog drool on your pillow.  When it’s crunch time, though, you need to use a “yes or no” format to get an answer to the real question: “Did you kill your wife?”

Using proper interview techniques is the job of the investigator, but validating the truthfulness of the subject’s response is the job of the Computer Voice Stress Analyzer (CVSA®). In a study conducted by Professor James L. Chapman and scientist Marigo Stathis, they found that “of the 329 confession possibilities in this study, 92.1% of the CVSA examinations produced a ‘stress indicated’ result, and 89% of those culminated in actual confessions,” making this a valuable tool in suspect and witness interviews. Truth verification helps focus relevant questions developed while using active listening techniques and open-ended questions to build rapport and obtain information. You can then transition easily into the “yes or no” format for the exam, using questions most likely to obtain a confession. CVSA Examiners are also taught interview techniques like the Defense Barrier Removal System (DBR®) which focuses on getting the suspect to open up while the investigator assures them they are listening.

CVSA Examiners take the time to listen and use a conversational interview style, which is not only kinder to the interview subjects but also more effective. You can’t get a confession without allowing room for someone to speak, and you can’t take their words at face value without validation. The CVSA “listens” for indications of stress in the human voice and analyzes this input to determine truth or deception, but it’s up to you to ask the right questions so the technology can do its job.